Review of BAT's "For Better" 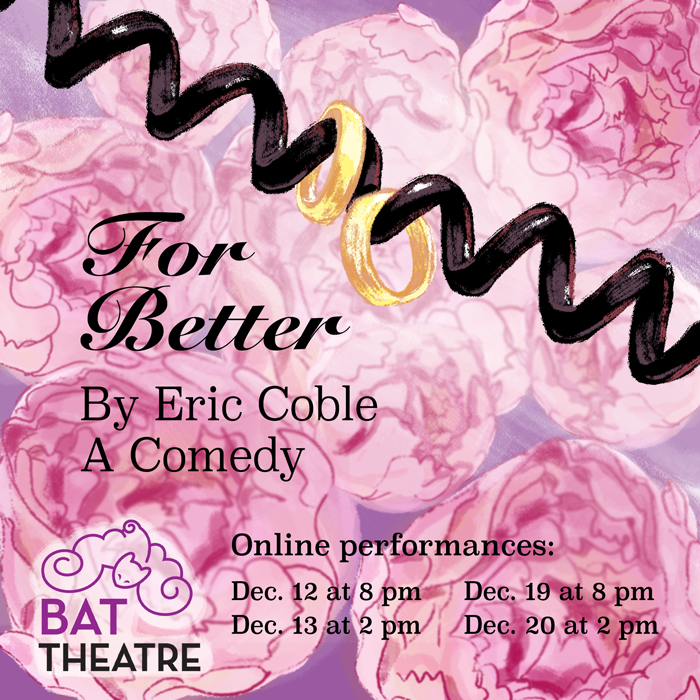 Modern day relationships benefit greatly from our technology to help grow and maintain their existence. We depend on computers to keep us in touch with our friends, lovers and relatives. For Better examines how our love affair with smartphones intertwine and complicate our lives, all while bringing us closer to each other than ever.

Written by Eric Coble and directed by Isaiah C Crowson, For Better is a romantic comedy that is both thoughtful and funny. The technology theme permeates throughout the story, being the main vehicle through which the story is told. The Zoom format of the show really shines with this story, and adds to the confusion of the chaotic phone tag scenes.

For Better opens with Karen Baedeker helping her father Wally Baedeker setup his TiVo. As Wally laments about the evil TiVo technology, Karen reassures him that he will end up loving it. Eventually the conversation turns to Karen’s personal life, and she tells Wally that she “thinks” she’s engaged and getting married.

It becomes clear during their conversation that Karen hasn’t really spent a lot of time with Max as he’s always traveling for Starbucks. Karen thinks this is alright since it was love at first sight, and they talk every day on the phone.

However, when Karen’s sister, Francine Dexter, hears of the engagement, Francine decides to do some digging and find out more about Karen’s mysterious fiancé Max. In a conversation with mutual friend Lizzie Monohan, we find out that Francine is tired of having to look out for her little sister.

Eventually we get introduced to Stuart, Karen’s lifelong friend, and find that he has had a crush on her but has been too sheepish to confess his true feelings. Stuart decides that this is the only time he’ll have a shot at wooing Karen, and makes a plan to confess his love for her.

Meanwhile, Francine recruits her husband Michael Dexter to get mutual friend Lizzie Monohan involved in finding out more about Karen’s fiancé. Michael reconnects with Lizzie, an ex-lover of his, and things get a little hot and steamy during a conversation they have over social media.

Just as things become more unraveled and discordant, Karen confesses to her father that she’s having second thoughts on her engagement, and questioning her decision to marry someone she hardly knows. While Wally tries to help his youngest daughter, Michael becomes involved in a phone conversation with Lizzie and Francine. During a very chaotic and confusing game of phone tag, Michael ends up confessing his love of Lizzie, but instead of Lizzie on the other end, its actually his wife, Francine.

The performances throughout the show are wonderful. The chemistry between the cast is great, and you get the sense that there is history between the characters. Jamey Cheek plays the lovable father figure Wally Baedeker, with Jessica Robins (as Karen Baedeker) and Alexandra Novotny (as Francine Dexter) playing his daughters. VJ Orduna (as Michael Dexter), Annie St. John (as Lizzie Monohan), and Asa Sholdez (as Stuart Tramontane) really shine during the more complicated and confusing scenes.

For Better closes out BAT Theatre’s Second Shelter-in-place Season in hilariously dramatic fashion. This romantic comedy blends romance and technology into a story about modern day relationships, and how hilarious and confusing it all can be. I really got the sense that we tend to take our relationships for granted as technology improves and closes the physical distance between each other; and I am reminded that we still need to nurture our relationships in meaningful ways, even though technology keeps us in close proximity.

As a final note I’d like to add that social distancing and self-isolation are very difficult things for all of us to endure. We are social beings, and need plenty of healthy interaction with one another. BAT Theatre productions don’t just offer its audience a fully produced show, but also provides a community for like-minded fans of theater. Make sure you stick around after the show to have a chance at participating in a Q and A with the cast and production crew.

For Better offers a commentary on modern relationships in an amusing and thoughtful story. There are two more opportunities to catch For Better on Dec. 19th at 8 p.m. (PST), and Dec. 20th at 2 p.m. (PST). For more information on For Better and the donation link, please visit https://burienactorstheatre.org/shows/shelter-in-place-season-2020/shel….

Because this is a different format than most will be familiar with, I will add a few tips to maximize your viewing pleasure:

• Take advantage of waiting the half hour before the show starts to allow ample time to adjust your settings.
• Make sure to mute your mic and turn off your webcam if you have one.
• Make sure that the button in the upper right of your screen is set to “Gallery View.”
• Pour your favorite beverage, sit back and relax.

While this second season of Shelter-in-Place is not the same as going to see an actual BAT Theatre show, it does offer a number of comforts to the alternative. Snacks and drinks are only limited to what you have at home, clothing is optional, as long as you avoid using your webcam, and you get social distancing approved live theater!

While this is the final show of BAT’s Shelter-in-place Season II, BAT Theatre has announced that a 2021 season is in the works. A link to the announcement can be found here: https://burienactorstheatre.org/shows/shelter-in-place-season-2021.

The BAT Theatre has been performing shows in the Puget Sound area for over 40 years, and is a non-profit 501(c)(3) entity that relies heavily on ticket revenue, donations and volunteer help.